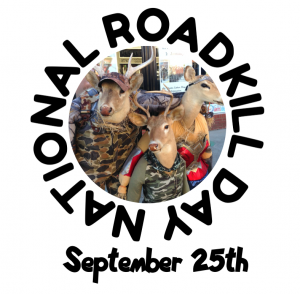 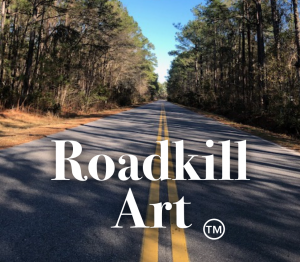 Roadkill Art an app for the back roads roadkill hunter looking to drive less.

For the first time National Roadkill Day' is celebrated bringing awareness to roadkill as an acceptable food choice with a positive impact on health.

Find it, Prepare it, Cook it, Eat It, Craft it into Art.”
— Janet Arneau

CHARLESTON, SC, UNITED STATES, September 17, 2021 /EINPresswire.com/ — National Roadkill Day celebrated September 25th, Sponsored and Hosted by Roadkill Art is created to bring awareness to the value of roadkill. Once it is learned roadkill is edible many animals left to vultures can be picked up, providing as much as 60 pounds of meat if it’s big game. Time is of the essence when roadkill becomes available, National Roadkill Day helps bring attention to available food instead of passing it by without the knowledge it can be dinner.

We celebrate National Roadkill Day with game meat recipes. Many people have never had venison, wild boar, squirrel or possum all excellent meat providers. The day brings awareness through delicious meat dishes. If you have a roadkill recipe to share post it on our Facebook page anytime during the month of September. https://www.facebook.com/roadkillart/

You are invited to join us on the Roadkill Art Facebook or Til Tok pages, all day September 25th, and catch any one of our line up of game meat cooks and chefs ‘live’ as they prepare their favorite roadkill dishes. The cooking fun begins at 12:00 pm and continues until 7:00 pm. Tune in and catch a dish that could be a forever favorite.

National Roadkill Day is the day to celebrate all those animals who aimlessly happened upon the front end of a swift moving vehicle, providing those blessed who found him with some delicious nutrition. Wait!  What?  Did you say nutrition?  Yes.  We did.  Game meat is packed with Omega-3. The highest proportion of Omega-3 comes from wild animals that have grown up eating grass. Omega-3 has been reported to offer many health benefits such as:

Often throughout the US emergency service personnel will take fresh roadkill to any of our 14,000 soup kitchens where it is then prepared by skilled chefs and turned into delicious meals like roast, burgers, steaks, stew, shish kabobs and BBQ ribs. National Roadkill Day also brings these dedicated soup kitchen chefs who know how to utilize roadkill with their culinary skills, feeding numerous people, into the spot light, being the special people that they are. Without their skill to process and prepare roadkill there would be less people getting an amazing healthy meal.

See what soup kitchens are in your neighborhood: https://helppayingthebills.com/soup-kitchens-meal-programs-state/

Roadkill Art the Sponsor of National Roadkill Day is found within an app designed to make finding roadkill easy whether you’re someone looking for delicious game meat to barbecue, that soup kitchen chef wanting a big score of meat or an artisan looking to craft handmade goods from leftover scraps and skins also know as a taxidermist. The Roadkill Art app gets you to a fresh deer, first, it’s free and available for all iOS and Android phones, pick your link:

A function of the app allows you to report the location of a roadkill find on the map. If you come across roadkill or accidentally hit an animal on the road, mark it, large, small, fresh, old, even if you take the animal for yourself, you’ll be alerting others of a potential future hot spot. The app makes it easy to locate roadkill already reported by checking the List View/News Feed, cutting back time driving through streets and roads. The app is loaded with photos, videos, and ratings that show the condition of the roadkill. If you’re not interested in picking up an animal on the road for yourself, you can help others by reporting it on the app.

Roadkill is legal to take in 49 states, the only state it is not legal to take is Texas. The Roadkill Art App makes it easy to find out what is required when taking roadkill in a state, go to the Regulations icon (the orange star), click on a state for detailed information. You will first find a quick summary of your roadkill regulations divided into 8 categories.

Roadkill Art invites you to be a part of a unique community, we are looking forward to a fun, sharing, healthy roadkill lifestyle with you. To become a member of this unique, fast-growing community, all you have to do is download the app to your phone and register by answering a few simple questions. The system will walk you through these steps: