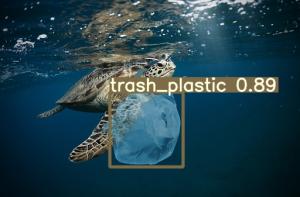 Oceans all around the world face a pertinent issue. The increasing amount of subsurface plastic debris poses a severe threat to marine life and the environment–as plastics cause damage to marine life via ingestion, suffocation, or restraint.

Quantifying and tracking marine plastic plays a critical role in restoring the oceans. Large-scale clean-up operations do not have sufficient logistical data to remove marine plastic from an operational perspective. For plastic to be removed efficiently, we need to know where it is located.

The researchers went to the field to hand-collect and annotated more than 4000 images of marine plastic to train the model. The algorithm was then tested and validated on images “DeepPlastic” had never seen before.

The results were significant–85% mean average precision, which means that the model accurately detects subsurface plastic around 85% of the time.

While the team works to get their paper published into a journal, they concurrently develop methods to synthesize images without needing to go into the field. They’ve also begun working with other researchers at the Monterey Bay Aquarium Research Institute to test the expansiveness of “DeepPlastic.”

Jay Lowe, a research engineer working on “DeepPlastic,” explains that, “In terms of visual detection, the ocean presents extreme factors not found in many environments such as occlusion, turbidity, and noise. This makes developing automatic methods to detect marine plastic particularly challenging. For this reason, only a handful of studies focus on automated detection applications such as ‘DeepPlastic.’ Our team feels confident that with future work, ‘DeepPlastic’ can be deployed worldwide in a variety of real-world scenarios”.

Watch their model in action: https://www.youtube.com/watch?v=QK2YZL3TCZ0