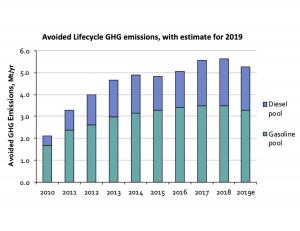 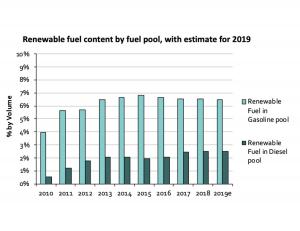 Renewable fuel content by fuel pool, with estimate for 2019 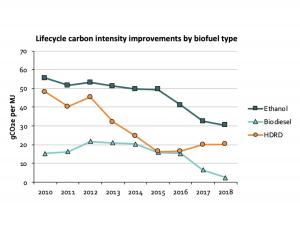 The data make clear why advanced biofuels are indispensable to exceeding our 2030 targets and achieving net-zero emissions by 2050.”
— Ian Thomson , ABFC President

VANCOUVER, BRITISH COLUMBIA, CANADA, October 19, 2020 /EINPresswire.com/ — Advanced Biofuels Canada (ABFC) announced the release of the Biofuels in Canada (BIC) 2020 report, independently authored by Navius Research, which updates and expands upon previous reports. The BIC report series began in 2017 and has become an indispensable resource to understand renewable fuel use in Canada.

“The full community of stakeholders engaged in transportation fuel policies in Canada has come to rely on Navius Research’s annual report to provide robust, comprehensive biofuel and emission reduction data and analyses. The 2020 report is particularly relevant to understanding how the proposed federal Clean Fuel Standard will impact Canadian fuel costs and reduce transportation emissions. The report also profiles, on a province by province basis, the important role that regional fuel policies have played in reducing greenhouse gas (GHG) emissions in provinces that have taken early action,” said Ian Thomson, president of ABFC.

“What stands out in this report is the power of market-based mechanisms to both reduce emissions cost-effectively and to incent innovation. With British Columbia as the longstanding test case for decarbonization policy, we see further improvements in the lifecycle carbon performance of biofuels to deliver record greenhouse gas emission reductions, with no material change to consumer fuel prices. The data make clear why advanced biofuels are indispensable to exceeding our 2030 targets and achieving net-zero emissions by 2050."

"New capital investment projects are under active development to increase clean fuel production in Canada that will help our farming and forestry sectors weather global trade headwinds, and support more resilient, prosperous rural communities. Canada’s fossil fuel refining sector is actively developing renewable fuel production capacity as well. There is a global race to build new clean fuel capacity to replace reliance on gasoline and diesel fuels; given our enormous energy, agriculture, and forestry resources, and clean tech know-how, this is Canada’s opportunity to win in the clean energy economy.”

The BIC report quantifies the volumes of renewable transportation fuels consumed in each Canadian province, by fuel type, feedstock, and carbon intensity. Covered fuels include ethanol, biodiesel and hydrogenation-derived renewable diesel (HDRD); petroleum fuel use is also surveyed. The full lifecycle impact on GHG emissions is calculated, as is the impact on fuel costs for the average consumer. Navius also updated the analysis on the role of fuel taxation on consumer costs.

New analyses in the 2020 edition include: estimated results for 2019; a methodology to compare carbon taxes and compliance credits; and, an assessment of clean fuel abatement costs from the perspective of fuel suppliers.

Amongst the report’s highlights:
• Annual avoided lifecycle GHG emissions resulting from biofuel consumption reached a record 5.6 million tonnes in 2018
• Ethanol use in gasoline was 3,034 million liters in 2018 (6.5% of the gasoline pool). Biomass-based diesel use in the diesel pool was 711 million litres (2.5% of diesel fuel)
• Using actual fuel market prices, biofuel consumption reduced fuel expenditures in Canada by 0.8% from 2010 to 2018, relative to a counterfactual scenario of no biofuel blending
• The biofuels cost impact is equivalent to an annual $27/year savings for an average gasoline consumer (i.e. car/pickup), or an additional cost of $206/year for an archetypal diesel user (i.e. freight truck), adding 0.6% to overall diesel fuel costs
• Biofuels abatement costs were negative $322/t (i.e. a savings) in the gasoline pool and $144/t in the diesel pool, before consideration of external benefits (reduced pollution, health care costs, etc.)

Data in the report on British Columbia’s LCFS show that it has been successful in driving innovation in biofuels. In the 2010-2018 period, biofuel producers reduced the carbon intensity (CI) of ethanol by 45%, biodiesel by 83%, and HDRD by 58%. These innovations are consistent with the emergence in BC of a visible and stable compliance credit market, which has contributed also to the cost effectiveness of the overall regulation.

The 2020 report addresses a common error in low carbon fuel policy analyses: the incorrect assumption that compliance credit market prices are the equivalent of a carbon price. From the report, “A LCFS credit price and a carbon price with the same $/tCO2e value have a very different impact on retail fuel prices” as a carbon price applies to 100% of the fuel’s emissions, while an LCFS credit applies only to the required CI reduction in a given compliance year (e.g. 1% of the fossil CI). As a result, a $150/t credit price would add 4 cents per litre to an E10 blend, whereas a $150/carbon tax would add 34 cents per litre. The report also notes that credit prices represent the highest marginal cost of compliance; in 2018, 77% of BC’s compliance was directly generated by obligated parties using low carbon biofuels, with only 23% of the credits transacting on the open market exchange.

The report highlights the disproportionate tax burden on biofuels when compared to petroleum fuels (gasoline, diesel) or other clean fuels. Volumetric fuel taxes (e.g., excise, carbon) on biofuels have increased fuel costs for consumers and created windfall tax revenues for governments of over $1.6 billion since 2010. “Policies to reduce fossil fuel use are undermined by an antiquated fuel tax design structure in Canada,” said Thomson. “Aligning fuel taxation policies with climate and economic growth goals is long overdue. Non-fossil fuel use from EVs, hydrogen, and biofuels is only going to increase. The 2020 report makes the impact of these perverse tax costs, and the need for reform, even more clear.”

The full report and data tables are available at: https://www.naviusresearch.com/publications/2020-biofuels-in-canada/