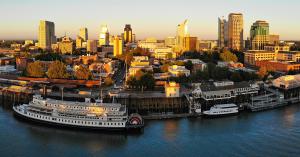 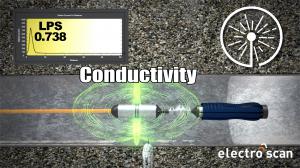 Low Voltage Conductivity provides unbiased, unambiguous, and uncontested water leak locations and an estimated liters per second for each defect, with readings generally recorded during pull back when the Hydrochute is collapsed. 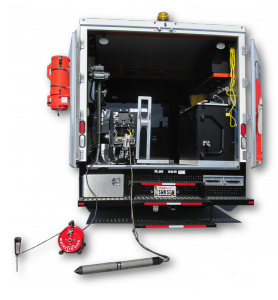 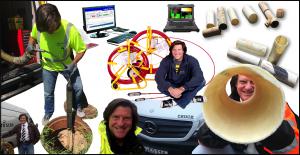 Chuck Hansen in the field with his multi-patented machine-intelligent probes. 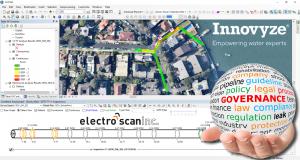 The company's trailblazing award-winning products & services is disrupting the trillion-dollar pipe construction industry having consistently found that some contractors and suppliers deliver new & rehabilitated sewer & water pipes to governments & utilities that leak MORE AFTER REPAIR, THAN BEFORE REPAIR.

A significant finding given pipe specifications are typically published by professional engineers that previously had to rely on legacy-based CCTV cameras to approve multi-million-dollar pipeline projects.��

The Sacramento startup community supports an ever-expanding network of new businesses that includes nearly 200 independent companies and a metro area population of 2.1. million.

"��This year, revenues from outside the U.S. are outpacing our U.S. revenues," stated Chuck Hansen, Founder & Chairman, Electro Scan Inc.

Given the difficulties to find illegal connections in buried pipes, Electro Scan's ability to pinpoint tap connections from inside the pipe that can be compared to known billing addresses, directly impacts a utility's ability to find sources of Non-Revenue Water (NRW) and add revenue annuities.

"We are delighted to be recognized as Sacramento’s Best Tech Startup for the fourth year in a row," stated Hansen, a long-time California-based software entrepreneur that also plays Baritone & Bass Saxophones, playing on Tower of Power's last two CDs and current project featuring Huey Lewis.

��Earlier this year, Electro Scan was named to e.Republic's prestigious 2020 GovTech100 list. Representing the Top 100 Companies focused on making a difference in the government market.�

The company's products have also caused a positive disruption to the trenchless rehabilitation market after finding traditional leak detection methods were unable to reliably detect defects.

Given the increasing number of pipe failures, leaks, and pinhole defects found in CIPP lined pipes — a trenchless solution that allows a new pipe to be inserted into an existing pipe, without digging up the street — regulators, environmentalists, and elected & appointed officials, including bondholders and rating agencies, are taking a serious look at pipeline quality and environmental governance.

Because investor & municipal owned utilities have spent billions on pipeline rehabilitation using Cured-In-Place Pipe (CIPP), without the ability to adequately test the liners as watertight, many recently installed projects are recommended for re-inspection to determine Remaining Useful Life (RUL) and estimated capital costs to repair, replace, or renew the assets.

Engaged citizens, ratepayers, and utilities are often surprised to learn that Industry suppliers often claim of 50-year useful life for their products, yet often advocate a 12-month warranty on new pipe installations.

The company estimates for every dollar spent on Electro Scan owners can achieve a one hundred times return by
• Not paying for low quality or poor repairs.
• Re-capturing sources of non-revenue or wasted water.
• Safeguarding environmentally sensitive rivers, lakes, and streams.
• Improving rehabilitation decision support & selection by not replacing assets that don't need it.
• Achieving extended useful lives of their infrastructure capital investment.

Hansen is a former Chair of ASTM's Subcommittee on Technology and Underground Utilities and an investment advisor to Folsom, Calif-based Moneta Ventures.

Traditionally, most new pipe installations, including trenchless repairs & rehabilitations, have been inspected using high resolution Closed-Circuit Television (CCTV) cameras that are either pulled through a pipe or powered by remote-controlled electronics from the surface.

Many utilities allow the same contractor that installed the new pipe to also inspect their work using CCTV and visual inspection to approve their work.

Not even the introduction of artificial intelligence or machine learning to replace human interpretation of acoustic or visual inspections is expected to help utilities; especially since basic flaws persist in listening or seeing defects that cannot be heard or seen; whether reviewed by humans or machines.

Using a low voltage electric current (i.e. not acoustic, electromagnetic, fiber optic, radar, or sonar), establishing an invisible circuit between the inside of a pipe and an Electro Scan above ground mobile van, providing consistent and precise locations of any opening or defect with horizontal locational accuracy of 3/8th of an inch (1cm) with leak severities measured in gallons per minute or liters per second.

"People are often surprised to learn that no current international standard requires pipes to be delivered watertight," states Hansen.

“Nobody wants to be told they’re pipes leak more 'AFTER' repair, than 'BEFORE' repair, but city managers, chief fiscal officers, and leading utility managers, don’t want to issue long-term bonds, only to have their pipes fail in the short-term,” states Hansen.

But, pipe failures are not limited to trenchless rehabilitation.

Electro Scan has also studied newly installed Vitrified Clay Pipe (VCP) finding pipes often are able to 'PASS' a pressure leak test while still in a newly dug trench and can 'FAIL' after pipes are buried. When pipe integrity is needed the most.

With patent protection in the United States, Canada, Europe, and Japan, the Company not only provides professional services to perform independent certification of repairs and rehabilitation, but also offers a Technology as a Service (TaaS) licensing model allowing qualified governments, utilities, and contractors to conduct independent testing of major capital projects and condition assessment projects.

Data is automatically uploaded after each pipe test to the Company's cloud application utilizing a Software as a Service (SaaS) business model, with results available in minutes, worldwide.

"We hear so much about our ‘crumbling infrastructure’ that we can’t afford to allow new pipes to be installed without proper quality assurances,” stated Hansen.