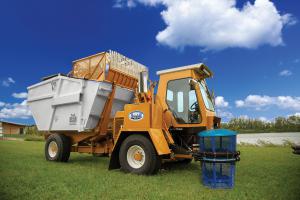 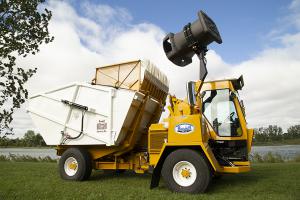 Since Load-And Pack was introduced, workers comp claims have been greatly reduced.

DAKOTA CITY, NEBRASKA, UNITED STATES OF AMERICA, June 1, 2020 /EINPresswire.com/ — Before the Load-And-Pack vehicle was introduced, trash receptacle emptying was a job that took a team of workers days to complete. Since Load-And Pack was introduced, workers comp claims have been greatly reduced, and 400+ containers can be emptied by 1 person in one day without ever needing to leave the cab.

4 cameras strategically placed on vehicle give the operator a full view of the left, right and rear of the Load-And-Pack; and, a view of inside the compactor box.

New LED high/low lighting on front, rear and on grip arm for better visibility at all hours.

New larger 9.5 cu yard box available with a 4:1 compaction rate – handles up to 38 cu yards of refuse in a single load.

These and 20+ more improvements make the new Load-And-Pack more efficient, safer and more ecological. Yet, all of the benefits of past Load-And-Packs remain.

Load-And-Pack by Broyhill picks up 400-600 wire baskets, 55 gallon drums or 26-90+ gallons poly containers with a single operator. Its hydraulic arm lifts up to 500 lb containers and the compactor box is loaded and unloaded from the operator’s seat.

The 7 cu yard compactor box is still available in addition to the 9.5 cu yard mentioned above and holds 28 cubic yards of refuse before needing an empty replacement.

The vehicle easily empties most containers at beaches, parks, hiking trails or sports areas such as soccer fields while repurposing your workforce and reducing or eliminating work comp.
Many park areas and public works, big and small, are using this accepted method with ease and is used by major USA parks, beaches and trail systems.

The Load-And-Pack is also used for recycling operation by running the route twice. By doing two passes, both recyclables and refuse are removed.

Interesting points to consider and propose when purchasing specialized refuse vehicles:
Able to Reassign Staff
Large Areas are No Problem
Parks, Beaches and Trail Trash Removal is Simplified
Work Comp is Reduced
Trash Pickup is Faster and Requires Only One Operator

Load and Pack by Broyhill